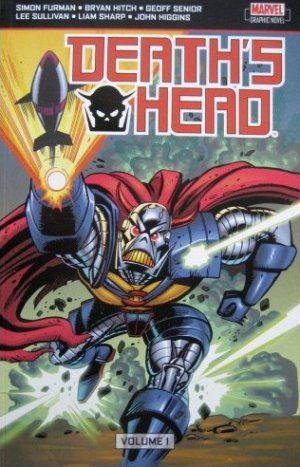 Don't get mad — kill something, yes?
Describe Death's Head here, yes?
"His name is Death's Head. He kills people for money. If you're one of his targets then that's all you're going to know about him; if you're thinking of hiring him then be warned — he's expensive and he always collects on his debts!"
Advertisement:

Death's Head is a Marvel Comics Comic Book character created by Transformers comic scribe Simon Furman and Geoff Senior. He was originally intended as a one-shot throwaway character for Marvel UK's Transformers series, but proved sufficiently intriguing during creation that the original script was rewritten so he would survive.

Death's Head's second published appearance was in Transformers UK #113 (May, 1987) when he was contracted by various Transformers to assassinate members of the opposing faction. During a battle between the Transformers and Unicron, Death's Head fell into a time portal and crashed into the Doctor's TARDIS. In defense, the Doctor (then in his seventh incarnation) shrank him to human size and sent him off through time, leading to a confrontation with the Dragon's Claws, a futuristic militia group. Though nearly destroyed in battle, Death's Head was recovered and rebuilt by a tinkerer named Spratt. After settling his score with the Dragon's Claws, Death's Head (with Spratt in tow) left to resume business as a Freelance Peacekeeping Agent. Prior to all that, however, Death's Head appeared in the one-page story "High Noon Tex" in several Marvel UK comics to ensure the character rights remained with Marvel rather than ceding to Hasbro.

His appearances have included crossovers with the G1 Transformers (in The Transformers), Doctor Who (in the Doctor Who Magazine comic strips), the Fantastic Four, She-Hulk, and Iron Man 2020. He starred in a ten-issue comic book series in 1988, along with a graphic novel (Death's Head: The Body In Question), assorted stories in Strip magazine, and several reprint compilations.

Death's Head has been redesigned and spun off several times by Marvel UK, most notably as Death's Head II, Death Wreck and Death Metal. In 2005, Simon Furman returned to the character by creating Death's Head 3.0 for Amazing Fantasy. In 2009 Death's Head I appeared in the S.W.O.R.D. mini-series penned by Kieron Gillen. In March 2011, issue #33 of Marvel UK's Marvel Heroes featured "Hulk vs. Death's Head," written by Ferg Handley and Simon Furman. In 2013, Death's Head I reappeared as a supporting character during two storylines of Kieron Gillen's Iron Man run, and again as an antagonist of Jeff Loveness' Nova run. In 2018, he showed up in the Infinity Countdown: Comic Book/Darkhawk mini-series and in 2019 he got a limited series of his own.

Death's Head a Robot bounty hunter (or rather, as he calls himself, a "freelance peace-keeping agent"), that got his start in the UK Transformers comic series. Eventually, he later on made his way into mainstream Marvel comics and has had different incarnations. He has recently resurfaced as a bounty hunter capturing alien fugitives for SWORD. 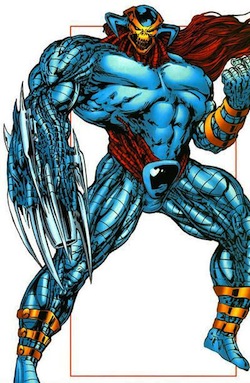 Death's Head II was originally a cyborg named Minion, created in 2020 by AIM scientist Dr. Evelyn Necker to protect the organization from a vague psychically predicted threat. In preparation, Minion was sent to assimilate the knowledge and personalities of the 106 most deadly individuals in the galaxy, killing them in the process.

The original Death's Head was one such target; after assimilation, however, he overwhelmed Minion's programming before it could take out its final target, Reed Richards of the Fantastic Four. Calling itself Death's Head II, the Minion cyborg proceeded to have various adventures as a traditionally heroic (and less amoral) figure.

Death's Head 3.0 is the predecessor to the original and Minion versions of Death's Head and was used as guards by the Red King on the planet Sakaar.