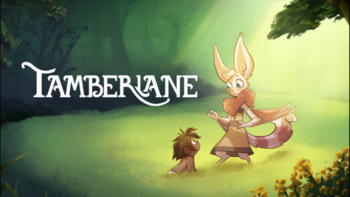 Tamberlane is a webcomic by Caytlin Vilbrandt.

In a World of Funny Animals, bat waitress Belfry Baker finds an abandoned, furless baby and decides to raise it herself. There's just a problem with that: She's the town klutz.

or on its' mirror here