Video Game / Sky: Children of the Light
aka: Sky 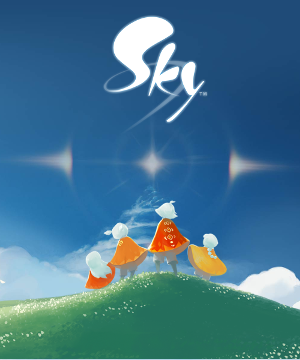 A game about giving
With the stars united, our light was infinite...
...and together, we lived in harmony.
As spirits, we soon became many...
...creating our home here in the clouds.
But darkness came and the stars fell...
...and with their light we faded away.
A long time has passed. Now we call to you.
Go forth, child. Return our spirits to the stars.
Advertisement:

Sky: Children of the Light (a.k.a. thatnextgame, a.k.a. "the game about giving", a.k.a thatskygame, a.k.a Sky) is a 2019 game from thatgamecompany. It is a Free-to-Play Coop Multiplayer exploration game where you assume the role of a Descendant, a flying cloaked humanoid who travels across a fantasy world set on top of the clouds. Originally released on iOS and Apple TV in 2019, it was ported to Android devices in 2020 and to the Nintendo Switch on June 29, 2021.

and the Q&A with Jenova Chen

Now has a Characters page in need of some hearts.

You are about to be reborn...
The real journey starts here...