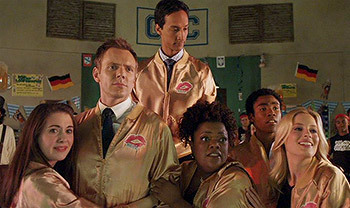 "God, it's a sea of Wingers. This whole place reeks of moral ambiguity."
— Britta

Jeff reconnects with Alan (Rob Corddry), a lawyer from his old firm. As he drifts away from the group, Chang makes an attempt at joining the study group by helping them win the school Pop-and-Lock-athon. Annie realizes that she has met Alan before, and that he was, in fact, the one who got Jeff disbarred. She tells Jeff, but he refuses to believe her. While Jeff attends an office party at the firm, the rest of the study follow him in an attempt to prove it, leaving Chang alone at Greendale.

The Community episode "Accounting for Lawyers" provides examples of: