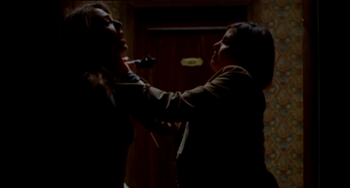 Connor, Wesley and Cordelia force their way into Wo-Pang's chambers and question him about Angel's soul, only to find that Angel's soul still remains in its container, although he warns them that if the container is broken and the soul isn't being controlled, the soul will cease to exist, Angelus will get out, and they'll,"be screwed." Angelus continues to taunt the gang, angering Gunn over his relationship with Fred. Lilah sneaks in, emerging from the sewers holding a crowbar and attempts a deal with Angelus. She tells him that she wants him to destroy the Beast who has now killed everyone who worked at Wolfram & Hart, including those who weren't in the office when he attacked, and she is the final survivor.

Back upstairs, Gunn and Fred discuss their relationship and Fred's recent kiss with Wesley. Gunn realizes that the relationship is past the point of no return and ends things between them, before finally spoting Lilah on the video monitor and rushes downstairs to put a tranquilizer dart in Angelus while Lilah runs off. While the others question Lilah's intentions, Wesley chases and catches her. He thumbs through her copy of Rhinehardt's Compendium, finding information his copy does not contain. Lilah had received her copy on the pan-dimensional black market, and Wesley determines someone has erased the information in this dimension which includes memories, explaining why Angel doesn't remember the Beast while Angelus does (as he was dormant at the time).

The gang discuss the Beast, and if he could have servants working for him. However Angelus wakes up and informs the gang that the Beast doesn't have servants; rather, it is the servant. He explains that the Beast he knew only cared about destruction, and didn't have the smarts necessary to cause the rain of fire or block out the sun. Therefore, it stands to reason that something even worse is waiting in the shadows and pulling the Beast's strings. Wesley returns with Lilah, but the gang are extremely suspicious of her and drill her about her intentions. Gunn leaves to keep watch on Angelus, who pushes Gunn's buttons again over his relationship with Fred and the gang. He mentions Dr. Seidel's death (from "Supersymmetry"), which he knows about because "even Angel's not that stupid." He offers to keep what Fred did a secret, but Gunn corrects him that Fred didn't kill Seidel, prompting Angelus to praise him for "steppin' up and bein' the man!" Angelus mock-commisserates with Gunn about Fred's affections shifting to Wesley, citing Wesley's recent descent into more violent behavior as the cause; "for once in your life," Angelus teases, "you just weren't dark enough." Gunn responds with a blast from his flame thrower, and Angelus crows that there's "hope" for Gunn yet.

Fred informs Wesley that she's no longer with Gunn, but Wesley takes the news as an opportunity to make another move on Fred, though he's interrupted by Cordelia and Lilah. Lilah and the gang argue about the possibility of saving the world, but then Cordelia gets a vision that allows her to see how to get Angel's soul back. Fred goes downstairs to inform Wesley about Cordy's vision, and she exchanges barbs with Angelus. While mock-praising Wesley, Angelus casually mentions his sexual liaisons with Lilah - another shock for Fred. Gunn and Connor dig up the grave of a soul eater, the skull of which is needed to return Angel's soul. Once they hit the coffin, the soul eater proves to be more active than dead and attacks the duo. With Connor incapacitated, Gunn is able to chop the demon to bits and retrieve the head.

Meanwhile, the Beast offers a gift to its unseen master; a knife made of his bones. Cordelia and Fred present the talismans they built for the spell while Gunn and Connor return with the fresh demon head. The spell is set up in the basement while Angelus tries to discourage them from trying. Wesley chants and a white soul-like mist emerges from the skull, passes through the talismans and surrounds Angelus in the cage. Angel's soul seems to be returned and once Angel sings forLorne, it's concluded that his soul really has returned. Still worried, Angel decides to stay in the cage and direct the others. Cordelia refuses to take his orders because he's acting like a coward and convinces him that he needs to be out of the cage. Free, Angel grabs Cordy, revealing that the spell did not work and that he is still Angelus. Cordy fights back and tries to hide in the cage, but Angelus knocks her out and heads upstairs to continue his Angel charade.

Angelus drops in on Fred, and the others are still fooled by him, but they don't get long to chat as he leaves spouting an excuse about going out to save the world. Spotting an unconscious Cordy in the cage, they realize Angelus lied and depart to find him. A consensus is reached that they won't be saving Angelus, they'll be killing him on sight now. Angelus roams the crazy streets of LA, but can't find anything but dead bodies and vampires, and he doubles back to the hotel. Lilah fires a round of bullets at him and Cordy tries to shoot him with the crossbow, but none of the attempts are successful. Angelus throws the crossbow bolt back at Cordelia's leg, taking her down and leaving him to deal with Lilah. Connor tracks Angelus back to the hotel. Angelus stalks Lilah until he finally finds her trying to hide. He takes her ax from her, but before he can kill her with it, she tosses him over a stair railing and runs off. Lilah runs into Cordelia, telling her that Angelus is going to kill them all. Cordelia responds by stabbing Lilah in the neck with the knife made from the Beast's bones, revealing that she is the Beast's master, and taunts her, saying that she let Angelus out for a reason.