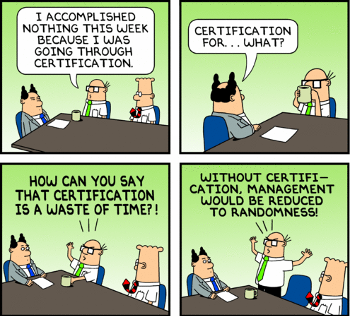 When the Pointy-Haired Boss comes across as the sane one, something is wrong.

The Strawman Fallacy occurs when a debater constructs a more easily defeated version of his opponent's position to attack, rather than addressing his real arguments. The fallacy takes its name from straw dummies used in old-fashioned combat training; these dummies were made to look like a potential opponent, but provide no actual resistance. The fallacy itself is comparable to defeating such a dummy, then proclaiming you have defeated an actual opponent.

"The NRA supports the right to bear arms, so they support private ownership of nuclear weapons."

For examples see The War on Straw. Beloved of Author Tracts the world over. The Straw Misogynist and the Straw Feminist both use this technique subtly.

Bob has successfully sidetracked Alice from the cost of health insurance to the necessity of many medical tests. This is often done subtly by altering the meaning of one of the terms used in the original argument, to rebut what appears to be the same argument but is actually a totally different one.

In this extended form it should be clear what the problem is; Bob is addressing a claim Alice obviously never made (that the unmade bed was not a form of human expression) and therefore using a distorted version of her position to rebut her. This is true even if the Suppressed Correlative uses the word in a more technically correct way than the original; if you know your opponent is using a word incorrectly, it follows you know what they intended it to say and should rebut that argument.