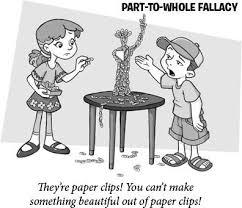 A type of generalisation fallacy. Inverse of the Fallacy of Division, where it is argued that the parts must inherit traits from the whole.