Literature / The Weakness of Beatrice the Level Cap Holy Swordswoman 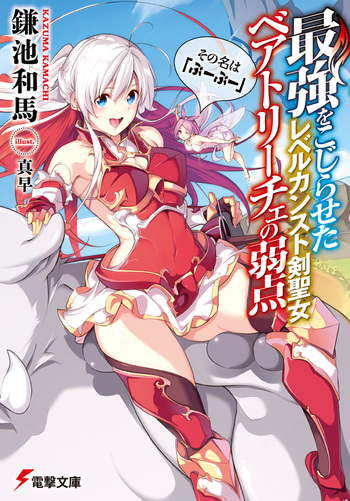 Ground's Nir. An alternate world of fantasy and wonder, with magic that offered limitless possibilities. But when humans first discovered this mystical place, the range of possibilities was so great that it actually limited what they could do here. Eventually, a mysterious figure known only as the Sage provided an answer: a system of magic modeled after video games, a format which modern people were familiar with.
Advertisement:

Armed with this information, humanity explored the world of Ground's Nir. They discovered that, while objects couldn't be transported between Ground's Nir and Earth (save for human bodies), the same was not true of information. Moreover, the information gained from Ground's Nir gave rise to breakthroughs in technology. As a result, governments and corporations around the world devoted their interest in this new world.

Enter the main protagonist, Beatrice. With the job of Holy Swordswoman, she has reached the level cap of 99, becoming one of the strongest humans in Ground's Nir. But her incredible power isolated her from other humans, making it difficult for her to form a party with others. Therefore she was forced to stop visiting Ground's Nir for a few years. Still, there was a bright side to it all - she'd made friends with a young Miniature Orc, Boo Boo, and promised to meet him again when she returned.

Two years later, the general skill level of humans had advanced, and Beatrice could return to Ground's Nir. But as it turned out, Boo Boo wasn't actually a Miniature Orc at all...

The Weakness of Beatrice The Level Cap Holy Swordswoman That Made Being the Strongest Even More Trouble – His Name? Boo Boo is a Light Novel series by Kazuma Kamachi, the first volume of which was released in 2016. It is complete at seven volumes.