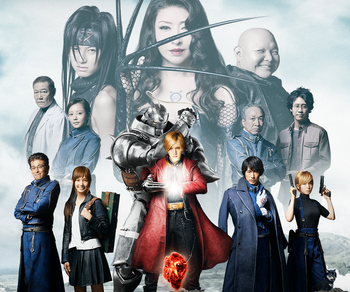 The Live-Action Adaptation of Fullmetal Alchemist, which was filmed in Italy and Japan from June to August 2016 for a December 2017 release. Directed by Fumihiko Sori (Dragon Age: Dawn of the Seeker, live-action version of Ping Pong) and starring Ryosuka Yamada as Edward Elric, Tsubasa Honda as Winry Rockbell, Dean Fujioka as Roy Mustang, and Atom Mizuishi as the voice of Alphonse Elric. It was licensed by Netflix and released in the United States, United Kingdom, and other territories in February 2018.

After a childhood attempt at human transmutation goes awry, alchemist brothers Edward and Alphonse Elric are on a quest to find the Philosopher's Stone, which they believe holds the key to regaining Ed's arm and leg as well as Al's body. However, they are pulled into danger as they infringe on military secrets and run afoul of mysterious creatures called Homunculi.