It is said that only Digimon who are continuosly victorious in battle without their spirits being "broken" may earn the coveted title of "Bancho", codenamed "BAN-TYO". At the moment, there are only five known members.

Tropes that apply to the Bancho as a whole: 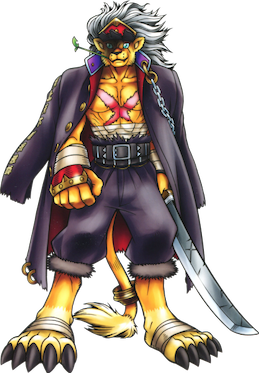 A Beast Man Digimon which lives faithful only to the "Justice" in which it trusts. It is said that only Digimon who continue to emerge victorious in battles with fierce champions, without their spirit being "broken", are able to acquire the title of "Bancho", and only five Digimon which possess this title have been confirmed in the recorded history of the Digital World. As it is a boss that only serves its own "Justice", if something becomes an obstacle to that "Justice", it will see them as "Evil" even if they are a being like the Royal Knights or the Three Great Angels, and they will become an enemy that it has to eliminate. The "GAKU-RAN" worn over its shoulders is endowed with a defensive function that negates 89.9% of the opponent's physical strikes, and it wields a tanto named "Otokodama". 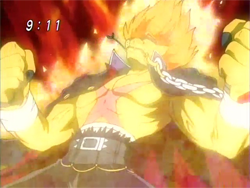 In Digimon Savers, BanchoLeomon has the ability to become BanchoLeomon Burst Mode, in which he becomes surrounded in a burning aura of flame. 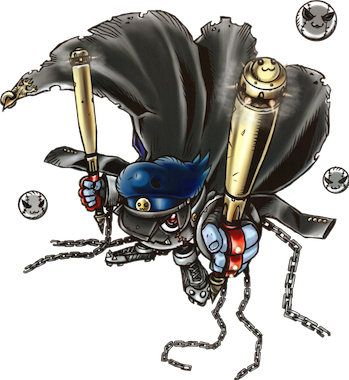 One of the Digimon that have acquired the title of BAN-TYO, it fights strongly in spite of its small stature, and has a personality that sports a chivalrous spirit and deeply overflowing emotions. As it tries to rebel against the rules of the Digital World, it lives an independent life. It similarly extends a hand to those Digimon who feel ill at ease with and isolated from the world, and from living together they have formed a group called the "Mame-mon Rengō". However, continuing to betray the rules of the world is not an easy task for them, and although BanchoMamemon has had to fight those Digimon who aim to usurp it as leader under the pretense of a rebirth of the group several times over, the collective power of the Mame-mon Rengō have made those usurpers withdraw. It is thought that it acquired the title of BAN-TYO from being able to avoid enemies without losing its own family as well in all kinds of predicaments. As with BanchoLeomon, it wears a GAKU-RAN that negates the impact of physical attacks, and this defensive effect is often used to protect its companions. Its Special Moves are using its favourite clubs Ougon Batto, to beat enemies to a pulp (Golden Rush), and hammering out its brotherly Black Hickeys from the Ougon Batto (Senbon Dokkān). Moreover, it has a Technique called "Bukkomi Otokodama", wherein it extends the prison chains sported on its entire body as it charges towards the enemy. 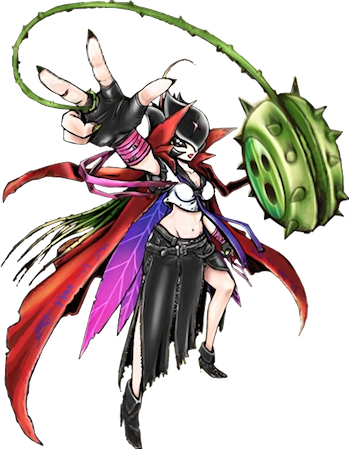 A crimson tokkō-fuku wearing fairy-type Digimon. The gorgeous petals it had in the days it was a Lilimon have been dyed a dark color, and the pretty impression it made is long gone. In a Digital World of the survival of the fittest, it believes in fighting for the underdog, having saved a lot of those who were attacked by evil Digimon. It was awarded the title of "BAN-TYO" when it donned its tokkō-fuku, a testament to its beliefs. 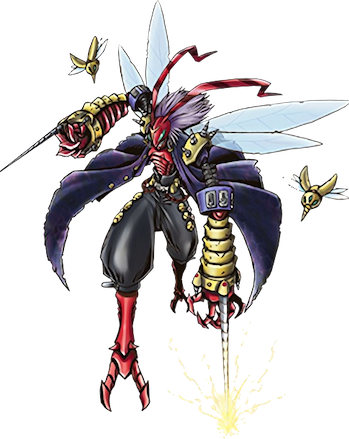 An Insect Digimon who is full of pride and survives by constantly intimidating everyone around it. It gives top priority to its own pride out of everything else, and its high-ranking pride is said to be first-rate among all of the Digimon. It has a behavioral trait where, if someone damages its pride even a little bit, it will not ever forgive them, regardless of whether they are friend or foe. It is said that it won the title of BAN-TYO through its pride alone, rejecting all offers of a compromise. Its symbolic Gakuran was minutely sewn with the shells of various insects, so it has become very firmly-made.Its Special Moves are skewering enemies with the drills on both of its arms (Bloody Finish), releasing Kiraichū that self-destruct when they hit enemies (Bakuraiten), and headbutting an enemy hard enough to shatter their face (Redbutt). 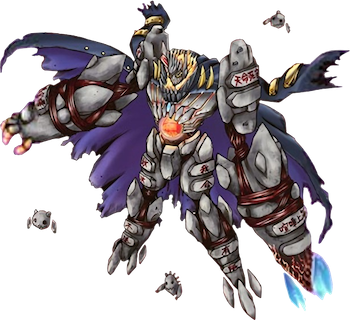 One of the BAN-TYO, this Mineral Digimon differs from regular emotionless Golemon in that it acts out of its own will. Its figure stands tall and imposing, unconcerned with its surroundings; its harsh treatment extends to everyone, and it will not show even the slightest sign of leniency. It puts even itself under harsh training by stationing itself in the fiercely inhospitable depths of Infinity Mountain.It is a mysterious Digimon that, although will hardly ever lend a hand to strangers in need of help, will show up even out of nowhere in order to save a comrade with whom it has exchanged blows. With its overwhelming power, it can turn the tables on a disadvantageous situation in one sweep and claim victory.Its Special Moves are gripping the enemy in its right hand and hammer-throwing them into the distance (Tenbagaeshi), reflecting the beam fired from the Kanshakudama in its abdomen off of Falling Stones, resulting in an attack with a large area of effect (Kanshaku Dust), and impaling the enemy with the gigantic excavator on its left hand, which is capable of pulverising even Chrome Digizoid alloy (Yobori Claw Drill).