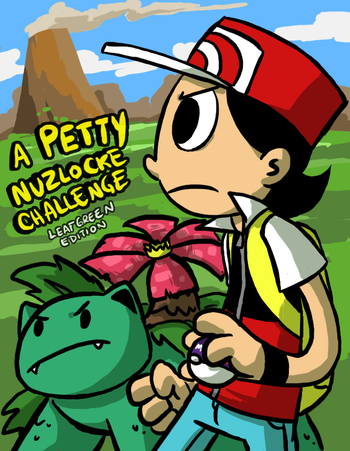 "No, it won't all go the way it should, but I know the heart of life is good."

One of the most highly regarded fan-made Nuzlocke comics, A Petty Nuzlocke Challenge tells the story of PettyArtist's run through Pokemon LeafGreen.

The story is told through the perspective of a young, boyish-looking girl from Pallet Town named Locke. Locke begins her Pokemon journey with her Bulbasaur, Spuds, just to get away from her deadbeat mother and Professor Oak. The comic starts out purely gag-based, but becomes much darker and more emotional as it goes along.

The original comic is now complete, but a sequel set in Pokemon HeartGold is currently ongoing. After three years and moving to Johto, Locke find out that her trainer card is expired and she is no longer legally able to train her Pokemon. In order to fix this, she sets out again with her new starter, Athena the Totodile.

, and the sequel can be found here.