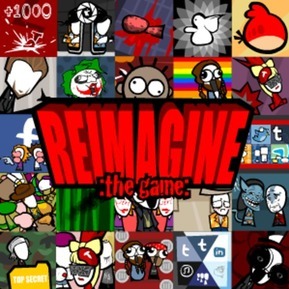 Captions: The Game
AKA giving short sentences.
TVTROPES
:the game:
(a.k.a. ruining your life.)
Advertisement:

is a VERY violent, bloody, hilarious, and, most of all, Bloody Hilarious game on Newgrounds by a young Nicky Case. It's about... well... life. Kind of. There's not really any plot to speak of until the third game, and for most of the time, it runs on Vulgar Humor, though the games are a frequent vehicle for political commentary. It later received a sequel called Replaying :the game:. The first and second games are VERY simple: Jump off a ledge. That's it, barring the odd minigame. Each level has you do so with a different theme, such as art, or open source. The only real variables is the character, and the background. Occasionally, you get a cut scene. They are very tasteful and wholesome. And funny.

The third game is right here

, Reimagining :the game:. This one actually has a plot... kind of. You jump off a cliff, and land in another world. Then, Lady Gaga, the cast of Toy Story 3, Apple, and even freaking Paul Vasquez (AKA the Double Rainbow Guy) all do... their thing. Then, the head of BP causes an oil spill, which he uses to land in an incinerator. Then Zalgo posesses him, and tries to kill everyone. Chell of Portal, Paul Vasquez, Barack Obama and Julian Assange of WikiLeaks, Justin Bieber and Edward Cullen of Twilight, the Angry Birds, and Airport Security and the TSA all team up. Then, you use the power of jumping off a cliff to kill him. His explosive death is so epic that everyone dies.

And by the way, you just lost it.