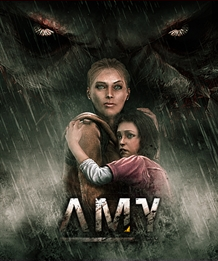 AMY is a survival horror/action downloadable game released in 2012 for the Xbox 360 and PlayStation 3, developed by VectorCell and published by Lexis Numérique, about a woman who must protect a little girl with incredible powers as they face off against an unstoppable force.

The game follows Lana, a woman who is travelling on a train into Silver City with an eight-year old speechless autistic girl named Amy, who exhibits unique psychic powers. As Lana travels with Amy on a train to see a doctor in the city, an unexplained explosion causes the train to crash, and Lana discovers that the situation is worse than she thought - most of the population has been transformed into monsters. Together with Amy, Lana must escape the Phoenix Foundation (the organization that originally had Amy) and deliver the young girl to the doctors in the city. Amy can exhibit a wide array of special powers, including computer hacking and psychic abilities that can be unlocked through drawing different glyphs present in the environment.

The main focus of the gameplay is leading Amy through the environment, which is usually accomplished by having her hold Lana's hand. A large component of the game involves solving puzzles, which necessitates using both characters in tandem to activate a switch or elevator for the other person to travel on. The player is required to hold Amy's hand as much as possible, as Lana can (and will) become infected if she's separated from her for an extended period of time.

Not to be confused with the 1998 Australian film or the 2015 Amy Winehouse documentary.