That One Boss / Dance Dance Revolution 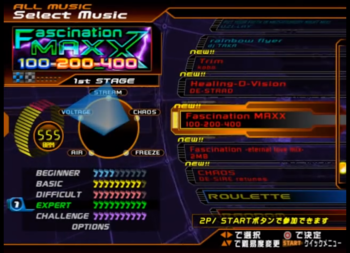 Sections in the Groove Radar spilling over? A rapidly pulsating speedometer? A huge number of steps even in the Beginner level? Yep, This Is Gonna Suck.
You have overcome many obstacles to unlock the song "MAX 300" by Ω. Clocking in at a blazing 300BPM, this is one of the hardest and fastest songs you will ever encounter.
— Song unlock info for "MAX 300" in DDRMAX -DanceDanceRevolution- (NA PS2)

With the steady increase in difficulty in every installment in DDR, there seems to be one way or another for boss songs, or just straight up "hard songs," to get more and more challenging for even the most experienced of players. As this is a game with a focus on intense body movement over the course of two minutes at a time, it's quite possible that a song becomes That One Boss for the player not because of the technical challenge, but because their body cannot physically keep up. Better hit the gym if you want to take on the game's hardest challenges!

Note that the songs, charts, and courses listed below are based on when they were released.

"Let's heat it up with this number! Ready? Okay, here we go!"

I'm so impressed I could cry! Thank you very much for your best dance!
DA-DA-DA-DA-DA—FAILED