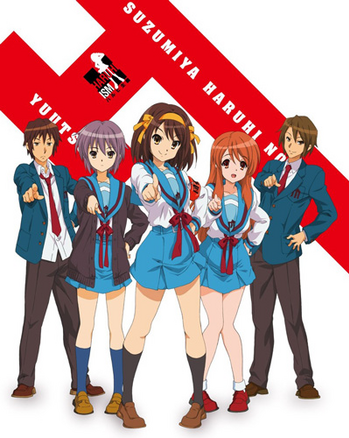 L - R: Kyon, Yuki Nagato, Haruhi Suzumiya, Mikuru Asahina, Itsuki Koizumi.
"I have no interest in ordinary humans. If there are any aliens, time travelers, sliders or espers here, come join me. That is all."
— Haruhi Suzumiya
Advertisement:

Both seasons were formerly on Crunchyroll, and the series was picked up by Funimation after Crunchyroll's rights expired. Funimation is releasing an "Ultimate Collectors Edition" DVD set of the full series, including episodes of Haruhi-chan, ~Nyoron Churuya-chan, and a fair chunk of Disappearance of Nagato Yuki Episodes. They have also been licensed the movie, though it isn't a part of the aforementioned collection.

As you might be able to tell from the length of this page, the anime in its first season became a smash hit both domestically and internationally, where it's been compared to similar ensemble absurdist comedies like Monty Python's Flying Circus. It spawned unthinkable levels of praise, with resulting amounts of Hype Backlash, a globe-spanning Cash-Cow Franchise, with fans from Japan to America to Britain to Russia to Palestine,

probably the largest body of backlash in the history of all anime, and made Kyoto Animation a household name.

The SOS Brigade dance to the anime's ending song.

The SOS Brigade dance to the anime's ending song.