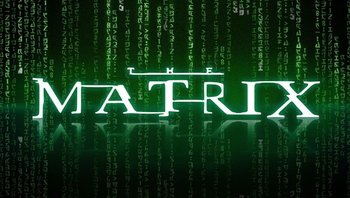 The Matrix has you.
"The Matrix is a system, Neo. That system is our enemy. But when you're inside, you look around, what do you see? Businessmen, teachers, lawyers, carpenters. The very minds of the people we are trying to save. But until we do, these people are still a part of that system, and that makes them our enemy. You have to understand, most of these people are not ready to be unplugged. And many of them are so inured, so hopelessly dependent on the system, that they will fight to protect it."
— Morpheus
Advertisement:

What is the Matrix? Unfortunately, nobody can be told what the Matrix is. You have to see it for yourself.

The Matrix is a multimedia franchise created by The Wachowskis which primarily revolves around a trilogy of sci-fi action movies starring Keanu Reeves as a hacker named Neo, Laurence Fishburne as his mentor Morpheus, Carrie-Anne Moss as his Love Interest Trinity and Hugo Weaving as the nefarious AI Agent Smith. The first film popularized the "Bullet Time" visual effect, and became one of the most influential (and oft-copied) sci-fi films since Star Wars. At least at the time, it was also viewed as one of the most culturally important films since then, spending a fair bit of time navel-gazing and touching on a number of concepts from philosophy and metaphysics.

Plans to relaunch the franchise and greatly expand its universe were discussed by Warner Bros but languished for quite some time until it was announced in August 2019 that a fourth Matrix film officially went into development, with Lana Wachowski returning to co-write, direct, and produce and Reeves and Moss reprising their roles as Neo and Trinity. Shot in 2020, the film's title was confirmed in August 2021 to be The Matrix Resurrections, and it was released in December 2021 in theaters and on HBO Max. The announcement preceded the (previously scheduled) 20th anniversary re-release of the original film in select AMC cinemas that same month.

Media in The Matrix franchise:

Unfortunately, no one can be told what tropes can be found within the Matrix. You have to read them for yourself:

open/close all folders
Tropes A to G
Tropes H to M
Tropes N to S
Tropes T to Z
Wake up, Troper...
The wiki has you...
Follow the blue entry.
Knock, Knock, Troper.
Feedback