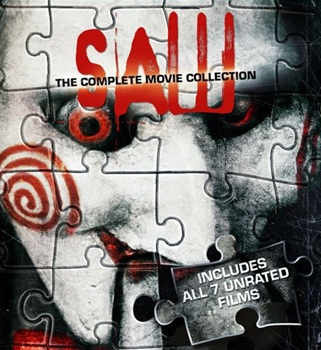 Saw is an American horror franchise — composed chiefly of a series of films — that originally started with the release of the first film of the same title, which was directed and written by Australian filmmakers James Wan and Leigh Whannell.

It centers around a Poetic Serial Killer dubbed "The Jigsaw Killer" (or just "Jigsaw"), who places people in Death Traps and gives them a chance to escape before death claims them. Jigsaw designs each trap as a violent form of poetic justice by reflecting what Jigsaw sees as the vital flaw of its victim(s). To escape these traps — or "games", as Jigsaw calls them — the victims must typically harm either themselves or others in some horrific way to escape their impending (and horrific) death. The films' storylines center around the victims' efforts to escape their traps, the attempts by law enforcement to catch Jigsaw, Jigsaw's life, and his connection to the films' other characters.

After the first movie originally premiered on January of its year at the Sundance Film Festival, Lionsgate theatrically released the first seven films in the franchise on the week prior to Halloween from 2004 to 2010. The seventh installment, titled Saw 3D, was renamed Saw: The Final Chapter for its home video release, as it was meant to be the Grand Finale of the series. According to Word Of God, the series was supposed to end with an eighth film, but due to the poor box office performance of Saw VI, Executive Meddling worked the plots of the original Saw VII and Saw VIII into Saw 3D.

In October 2016, a new film under the working title Saw: Legacy was announced to be in production. The title was later changed to Jigsaw, and the film was released on October 27, 2017. A ninth film, Spiral, was announced in February 2020, ultimately being released in May 2021 after a podcast titled Seeing Saw: The Official Spiral Podcast (in which various critics discussed the previous films with special appearances from several of the series' producers) was run to promote it. As of August 2022, an unnamed tenth film (generically referred to as Saw X) has been announced, set to be released on October 27, 2023.

These films (especially the first) inspired many imitations, though some argue that Saw itself is a form of imitation of Se7en: both films focus on elaborate, grisly murders carried out by a man trying to send a message to society. Whereas Se7en portrays John Doe as vain and interested in showing the world a lesson through murder, Jigsaw focuses on a more "individualized" message with his "games". Hell, the concept of a moralistic serial killer playing God to a society he deems morally corrupt didn't even originate with Se7en — and according to Word Of God, all of these ideas have always been carried out since the original 2003 short film that preceded the first movie.note Hilariously enough, though, the crew involved in Spiral did claim that they were aiming for a plot similar to Se7en for the movie.

A comic book titled Saw: Rebirth was published alongside the release of Saw II in both physical and digital format. The comic revolved around Jigsaw's backstory and life before he began his crusade as a killer, though the events that happened in it were eventually retconned by Saw IV, which had a different version of his past as one of its main plot lines.

The series managed to spawn two video game adaptations. In addition, the multiplayer horror game Dead by Daylight released a DLC based on the series in 2018. It features David Tapp and Amanda Young as playable characters, and includes a map based on the various films' locations.

In 2009, a ride based on the films opened in Thorpe Park, aptly named Saw: The Ride. It's notable for being the world's first rollercoaster based on a horror movie franchise.

WARNING: These pages contain no small number of spoilers, but many of the trope examples in them will assume you have knowledge of the spoilers of the first four films — and as such, those spoilers will go untagged. Even then it's advised to have finished watching the series first. Read on or go back — make your choice.

You think it's over? It's not over. The games have just begun.