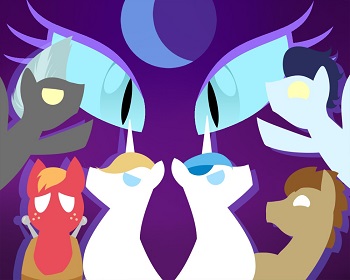 You are entering a different world. One with more testosterone, badassery and spice, but just as many feels. Welcome, to...

In this world, anything can happen and bonds of friendship can strike the most unlikely individuals.
Come in and learn about the adventures and lives of Prince Blueblood, Shining Armor, Soarin, Thunderlane, Big Macintosh and Doctor as the Elements of Harmony.
A world full of relationships, growth, life discoveries, awkwardness, manliness and a healthy dose of bromance.

Stallions of Harmony is a series of fanfics written by Jetto based in an Alternate Universe of My Little Pony: Friendship is Magic. It re-imagines the pilot where Blueblood and Shining Armor were both sent to Ponyville instead of Twilight for the Summer Sun Celebration. They are joined on their adventure by Thunderlane, Big Mac, Soarin, and The Doctor.

Has its own (rather small) group

and opened its doors to guest writers, thus making it a Shared Universe.

The stories in the Stallions of Harmony verse are:

Tropes in this series are: