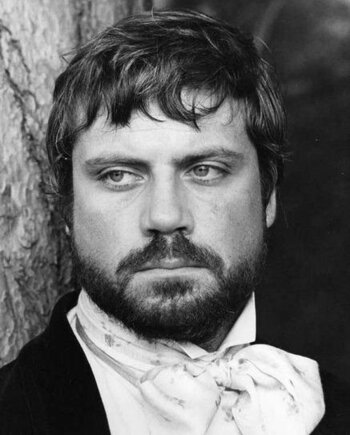 "I do not live in the world of sobriety."
— Oliver Reed
Advertisement:

Robert Oliver Reed (13 February 1938 – 2 May 1999) was an English actor, known for his brutish persona and extraordinary real-life drinking.

Some of his minor early roles were in Hammer films, including Paranoiac and The Curse of the Werewolf, his first starring role and Hammer's only werewolf movie. He also made several films with Ken Russell, including The Devils, Tommy (based on The Who's rock opera) and Women in Love. He played Bill Sikes in the 1968 Best Picture Oscar winner, Oliver!. (Its director Carol Reed was his uncle; Oliver had refused to work with him until he was established as an actor to avoid charges of nepotism.) For a little while in the late 1960s and early '70s, he was the highest-paid actor in Europe. Interestingly, he was the only top British star of the period who didn't have any experience or training in the theater. (Reed stated in interviews that he considered "life" to be the best teacher for actors, and thought that acting coaches were just actors who couldn't get work.) He played Athos in Richard Lester's trilogy of Musketeer films (including The Three Musketeers (1973), The Four Musketeers, and The Return of the Musketeers). His career faltered by the '80s and he was mostly reduced to doing paycheck roles, though he did get some respectable work, including playing the god Vulcan in The Adventures of Baron Munchausen, Billy Bones in a well-received 1990 TV adaptation of Treasure Island, and the slave dealer Proximo in Gladiator. He died while filming that last one, forcing some creative story alterations.

Reed was part of an infamously hard-drinking thespian foursome with Richard Burton, Richard Harris, and Peter O'Toole. He got into a bar brawl in 1963 that resulted in a scar on his face, which he was afraid would end his career (and accounted for the facial hair he often sported thereafter); another time he threw up on Steve McQueen. He was close friends with Keith Moon, a relationship which caused him no end of trouble, and also had an Odd Friendship with the wayward snooker star Alex "Hurricane" Higgins.note One boozy night out with Higgins ended with them having a sword fight. On another Reed convinced Higgins to drink a bottle of Chanel No 5; Higgins got revenge by spiking Reed's beer with washing-up liquid. Rumor has it that his alcoholism cost Reed the role of James Bond in the late 1960s as producers want him for it but felt his well-known hellraising ran against Bond's image and it would be easier to cast someone new than try, likely in vain, to change Reed's image. He was also known for playing crude pranks and for his boorish treatment of women; in one appearance on The Tonight Show Starring Johnny Carson, Reed so infuriated fellow guest Shelley Winters with his misogynistic comments that Winters spilled whiskey on him. On the night of his death, he had won four arm-wrestling bouts while heavily plastered. He also left behind a bar tab measured in thousands of pounds sterling for the Gladiator crew to take care of. (Newspapers noted the strange similarities between Reed's death and that of Robert Newton, who had played Bill Sykes in a 1948 production of Oliver Twist and died from one last bout of heavy drinking during the production of what was supposed to be his comeback picture, Around the World in Eighty Days.)

In fairness, at least some of Reed's behavior was exaggerated in the telling. Talk shows and interviewers openly encouraged Reed's drunkenness, because they knew it would bring them good ratings. Though Reed often went along with it in the '70s and '80s, later in his life he came to resent this, as many hosts only wanted to discuss his drinking and never his acting. As his health declined, Reed tried with mixed success to overcome his alcoholism; he reportedly had been several months sober before Gladiator started filming, only to fall off the wagon during that film's arduous shoot. And Reed could well be a nice guy when he was sober, though to be sure such moments were relatively rare. One anecdote, as recounted in Robert Sellers's book Hellraisers, describes Reed getting into a barroom brawl and roughing up several policemen. The incident was widely reported, less so its epilogue: Reed regretted the incident and sent the police a bouquet by way of apology. He also bought a man in a pub a house in Scotland simply because he promised he would if he became famous. By his own admission, however, Reed wasn't the easiest guy to live or work with and remains as well-known for his offscreen antics as his acting.