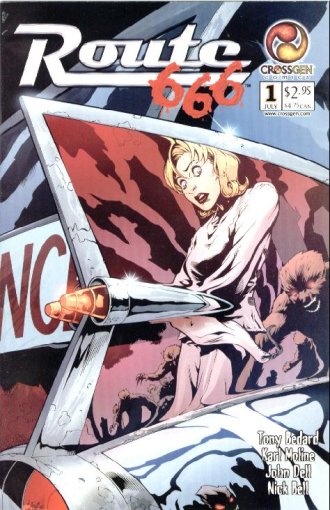 Route 666 is a comic series by CrossGen Entertainment. It follows the adventures of Cassie Starkweather, a college student who enters The Masquerade when, after the accidental death of a friend, she starts seeing ghosts. Her ability to see and converse with the dead is shortly followed by an ability to see monsters, or rather to see the true form of monsters pretending to be normal people. She is put into a mental institution after the trauma, but finds out that the institution is run by the monsters.

Escaping the institution, Cassie kills a few of these monsters. Unfortunately, once dead, they revert to human form, and she is now pursued not only by monsters and dark ghosts, but also by the police as a psychopathic killer.

Not to be confused with the 2001 horror film or the episode of Supernatural about a demonic truck.