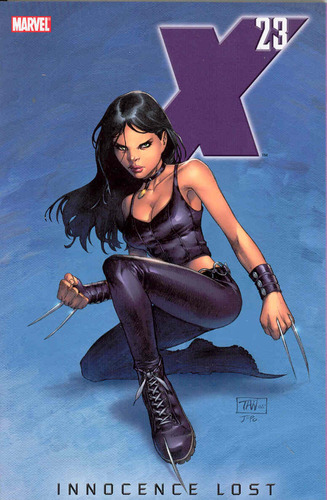 First published in in 2005 as a six-part miniseries and later released as a trade collection in 2006, X-23: Innocence Lost was written by Craig Kyle and Christopher Yost detailing the origins of Laura Kinney, AKA X-23.

The Facility, a civilian offshoot of the military Weapon X program under Dr. Martin Sutter, hires Dr. Sarah Kinney when attempts by Dr. Zander Rice to duplicate the Weapon X experiments on other mutants fail, resulting in the deaths of the test subjects. Kinney proposes that she can create a clone of the original specimen, Weapon X himself. Rice, whose father was killed by Wolverine during his rampage and escape from the labs where he was experimented on, objects, but Sutter orders that Kinney proceed with her experiments. Using genetic material salvaged by Rice's father before his death, Sarah begins the processes of engineering the clone, though it soon becomes apparent that degradation of the sample was severe enough that she suspects it might be years before a viable embryo can be created. Because the damage was worst on the Y chromosome, Kinney proposes that they double the X-chromosome and create a female clone instead, however this is rejected by Sutter.

Ignoring Sutter, Kinney proceeds with her experiments anyway, and successfully creates a viable clone on the 23rd attempt. Initially furious at her insubordination, Sutter nonetheless agrees to utilize the successful clone, and Kinney is forced by Rice to serve as a surrogate mother herself in order to save the fetus when he refuses to allow a search for another suitable host. Nine months later the clone is born.

Unfortunately, this is only the beginning of the ordeal for both Kinney and X-23.

Although not X-23's first appearance in the comics (which occurred in NYX), Innocence Lost allowed the character's creators, Craig Kyle and Christopher Yost, to establish her background within the context of the main Earth-616 universe. The miniseries remains one of X-23's most well-regarded stories, and, being a large part of her origin, elements of it were adapted in the 2017 film Logan, to form the basis of Laura's background.