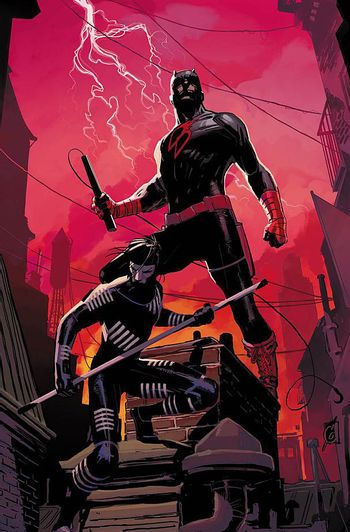 The Devil and his apprentice
"Let me be clear. You might know me as Matt Murdock, defense attorney, here to help. That guy's gone. I've changed sides. I'm now a prosecutor for the great city of New York. I put the bad guys away."
— Matt Murdock

Daredevil (initially collected in trade as Daredevil: Back in Black) is a 2015 comic book published by Marvel Comics, as part of the All-New, All-Different Marvel initiative. It's written by Charles Soule (Swamp Thing, The Inhumans and Death of Wolverine), with art primarily by Ron Garney and Phil Noto.

After finally coming out on top of things in Mark Waid's run, Matt Murdock is back in the thick of things. Having somehow erased the world's memories of his identity, Matt has returned to Hell's Kitchen, and is once again waging war against its criminals. At the same time, Matt Murdock has now become an assistant district attorney. Matt begins to battle against the villain Tenfingers and his gang on both fronts.

At the same time, Daredevil has taken on new hero Blindspot (Samuel Chung) as his apprentice. Sam is an illegal Chinese immigrant who has created an invisibility suit. He eventually decides to use the suit to fight crime, specifically in Chinatown, where he lives.

The run began in December of 2015, but had a short story introducing Blindspot in All-New, All-Different Marvel Point One #1 in November. In May of 2016, a Daredevil/The Punisher miniseries —coinciding with the second season of Daredevil— began, also written by Soule. After three years on the title, Soule's run wraps up in late 2018, with the "Death of Daredevil" arc.

In addition to the usual Daredevil tropes, Charles Soule's run provides examples of: