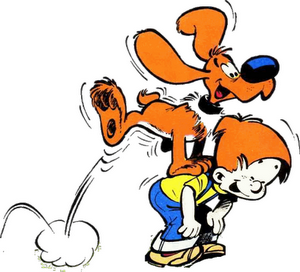 Boule et Bill (Billy and Buddy in the English translations) is a Belgian comic series created by Jean Roba in 1959 and still running since.

Inspired by Peanuts, the series is in its vast majority composed of one-page gags about a little boy and his dog from the 60's European middle class.

For the other series by Roba, see La Ribambelle.