These are the characters that appear in the Super Solvers games:

Our protagonist. A mysterious detective clad in body-obscuring clothes who constantly foils the plans of Morty Maxwell. 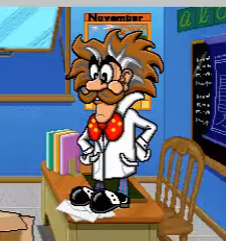 The self-proclaimed Master of Mischief, and the main antagonist of the series.

Morty Maxwell's minions in Midnight Rescue. They are 5 robots with paintbrushes on their feet/undersides to cover the Shady Glen school with disappearing paint.

Morty's robot minion in Outnumbered! Telly chases the Super Solver around the halls of the TV station. If you can zap him, he will give you clues on Morty's location, provided you can prove your skill at solving his math questions.

Another robot minion in Outnumbered! Livewire occasionally appears in the rooms of the TV station, and slithers around on the floor trying to zap the Super Solver to drain energy from their remote control.

A friendly dolphin who helps you out in Operation Neptune. Zoom's job is to replenish your oxygen supply when you're running out. 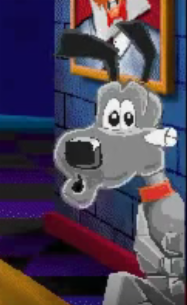 One of the Metal Minions in Mission: T.H.I.N.K. Unlike the rest of the Minions, who are cat-like, Rusty is built in the form of a dog. He doesn't like what Morty is doing, and decides to help the Super Solver.