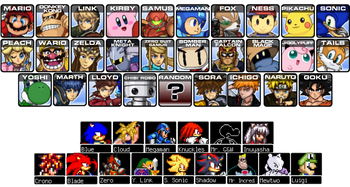 Super Smash Flash features a wide variety of characters from Nintendo and other game company's franchises, alongside a couple of manga/anime characters. In 1 there were also 2 Original Characters and 1 character from an animated movie. Between the first game and the new characters confirmed for the second, there are 60 playable characters in the whole series (counting Sheik).

As expansion characters are not officially supported yet, they will not be listed at the moment. Neither will characters that were going to be new additions in 2 but weren't confirmed yet post-Retool.