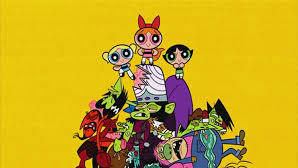 Saving the world before bedtime.
Advertisement:

So once again, the audience is awed, thanks to... The Powerpuff Girls.