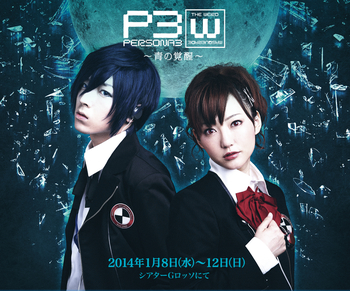 Write me an endless song.note From left to right: Shouta Aoi as Sakuya and Kana Asumi as Kotone
Advertisement:

Persona 3: The Weird Masquerade is a series of stage musicals based on Persona 3 Portable and ran exclusively in Japan from 2014 to 2017. Like the game, the story follows a New Transfer Student attending Gekkoukan High School in Iwatodai and joining SEES, a secret student organization aiming to end Shadow attacks during the Dark Hour. The musicals starred both the male and female protagonists, named Sakuya and Kotone Shiomi, in different rotating shows. Just like Persona 3 Portable, each protagonist sometimes had unique responses and scenes exclusive to their version of the play.

The plays used music from the original game, but also included new songs and ballads composed by Mako Kuwabara. Produced by CLIE Asia, the plays were written by Jun Kumagai (Persona 3: The Movie, Persona 4: The Animation, and Persona 4 Golden: The Animation) and Kotora Kagurazawa. As such, the pacing of the play is very similar to Persona 3: The Movie. All musicals saw a home release, and the home release versions were also simulcasted on Niconico.

Five stage musicals were produced during its limited run: