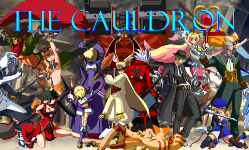 "Welcome To The Cauldron! Because I couldn't come up with a better name."
— Velvien, Forum Admin and Supposed First Post.
"Goddamn it Bonesy"
— Velvien's Actual First Post and Forum Catchphrase

A roleplay forum made by fans of the BlazBlue series.

What happens when you take a crack pairing for a fairly well-known video game series and post a Fanfic of it on the web? Normally, you get laughed out of the internet with reviews saying "That Would Never Happen." Velvien thought differently. Taking two characters from BlazBlue, he decided he liked them both so much, he was going to pair them up. Normally, this kind of thing leads to disaster, especially between Ragna, the main protagonist, and Tsubaki, a justice obsessed girl working for the opposite side. In canon, they would hate each other on sight. However, Velvien somehow made this work in his fanfic, On Strange Wings

. It garnered so much praise, that he made a sequel and somehow, the Ragbaki pairing was born and embraced.

After noticing the amount of people interested, Velvien decided to try something new. A roleplay forum that was a separate universe from his On Strange Wings canon but also had an overall plot, a goal and enough freedom so that people didn't feel like they were being railroaded. It took a while to get going, but now, The Cauldron is up and running. And it's only growing faster.

for On Strange Wings and here

for its sequel, At Fate's Hands.

The forum can be found here

Tropes For The Cauldron Include: