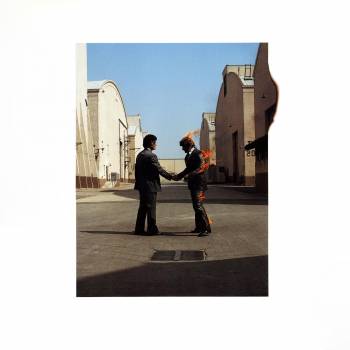 We're just two lost souls swimming in a fish bowl,
year after year.
You were caught in the crossfire of childhood and stardom
Blown on the steel breeze
Come on, you target for faraway laughter
Come on, you stranger, you legend, you martyr, and shine!
— "Shine On You Crazy Diamond (Part IV)"
Advertisement:

Wish You Were Here is the ninth studio album by Pink Floyd, released in 1975. The highly anticipated follow-up to The Dark Side of the Moon, it was made as both a harsh criticism of the music industry and a tribute to Syd Barrett, a previous frontman of the band who had been ousted in 1968 for drug abuse and mental decline.

By 1974, Pink Floyd were the biggest band in the world and had no way to cope with the sudden explosion of fame. As a result, Wish You Were Here hinges on the concept of Artist Disillusionment, as it deals with the harsh realities of the corporate side of the music industry and the band's wishes for simpler days.

The album came to be after Roger Waters became determined to keep the band together; as a result, he became responsible for most of the band's output during the 1970s. This, combined with his bandmates' escalating personal troubles that limited their ability to contribute, would end up resulting in Waters becoming more and more iron-fisted in his leadership, ultimately culminating in the chaotic production of The Final Cut in 1983 and Waters' departure two years later.

Barrett showed up during the mixing of the album, and his abnormal behaviour and dramatically changed appearance (having shaved his hair and eyebrows and gained considerable weight) brought Waters and Richard Wright to tears. Some reports actually claim that this event occurred during sessions devoted to "Shine On You Crazy Diamond", the song explicitly paying tribute to Barrett, although recollections are hazy about specifically which songs were being worked on.

Wish You Were Here was the band's first album to be released on their new U.S. deal with Columbia Records after what the band considered lackluster distribution by EMI's American division, Capitol Records. The band would remain on Columbia until 2000, when their rights to the post-The Dark Side of the Moon albums reverted to Capitol. Because of the Columbia deal, the album went on to become one of the first 50 titles

to be released on the Compact Disc format on October 1, 1982. The launch was handled by Sony, who were partnered with Columbia's parent company, CBS, in Japan; Sony would buy out CBS's worldwide music division, and Columbia with it, five years later, forming what would ultimately become Sony Music. Like the other 49 albums included in the launch lineup, the original release was exclusive to Japan, though the master was reused for a 1983 CD reissue in Europe. Pink Floyd's back catalog overall would prove very popular on the format. In the wake of the 2012 sale of EMI, Sony now distributes Pink Floyd's entire catalog outside of the U.K. and Europe.

The album was influential on the development of Electronic Music and specifically Synth-Pop, with its heavy use of synthesizers serving as a major influence on artists in these fields. Like its predecessor, the album was also a considerable commercial success from the get-go, topping the charts in the UK, the US, Australia, the Netherlands, New Zealand, and Spain, and going on to be certified diamond in France, septuple-platinum in Australia, sextuple-platinum in the US, triple-platinum in Canada, double-platinum in the UK, Austria, and Italy, platinum in Germany, and gold in Argentina, Greece, and Poland. The album still maintains high sales to this day; in 2018, it peaked at No. 32 on the Polish Albums chart.

Wish You Were Here was supported by one single: "Have a Cigar".

Preceded by The Dark Side of the Moon. Proceeded by Animals.

"And did we tell you the name of the tropes, boy?"

"And we'll bask in the shadow of yesterday's triumph
And sail on the steel breeze
Come on, you boy child, you winner and loser
Come on, you miner for truth and delusion, and shine!"
—"Shine On You Crazy Diamond (Part 7)"

Alternative Title(s): Wish You Were Here