Manga / Ran To Haiiro No Sekai 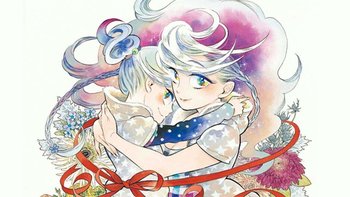 Little Ran Uruma can’t wait to grow up and become a sorceress like her mother, so with the help of a magical pair of sneakers, she transforms into an adult and sets off! Her father and older brother Jin try to keep her safe at home, but Ran is determined to advance her powers and have adventures of her own!

Even though Ran looks like an adult during her transformation, she doesn’t really know what perils the outside world holds. When she meets rich playboy Otaro Mikado, has she actually gained a friend or a foe?

Meet the Urumas, a slightly dysfunctional family of four sorcerers in the city of Haimachi. Mom, the most powerful sorceress on Earth, works away from home sealing an ancient evil to the world safe. Dad picks up the slack and takes care of the family. Except when he's out, which is when the older brother Jin finds himself in the unenviable position of keeping tabs on his sister Ran, a willful girl with too much power and too little wisdom.

Also known as Ran and the Grey World, Ran To Haiiro No Sekai is a Fantasy manga by Irie Aki.The official English translation will be released by Viz Media in November 2018.