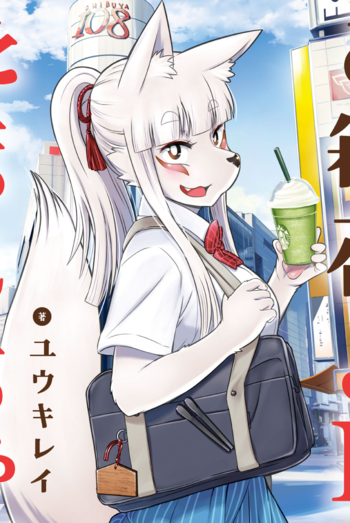 Tamamo Fushimi is a transfer student from Kyoto. She likes collecting acorns, fruits, and pretty stones. Her specialty is divination. By all accounts, she looks just like an ordinary high school student. ...at least, that's what she thinks.
—From the first page of the manga

What Tamamo fails to realize is that she isn't very good at taking on human form. She fools adults and cameras all right, but her classmates can see her true nature plain as day. Fortunately they're happy to pretend they don't notice and Tamamo remains oblivious, even as her classmates regularly leave her offerings in her shoe locker and greet her with prayers or as she turns into a statue when frightened.

Such is the story of O-Inari JK Tamamo-chan! (High School Inari Tamamo-chan!) by Yuuki Ray, a Yonkoma about Tamamo's life in school and her friends' efforts to keep her secret from being revealed.