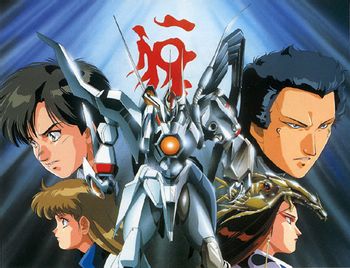 Hades Project Zeorymer is a manga by Yoshiki Takaya (better known as the creator of Guyver), written under the pen name Chimi Morio, and published in the adult manga magazine Lemon People from October 1983 to November 1984. A three-part finale was serialized in Monthly Comic Ryū in 2007. A four-episode OVA adaptation by AIC was produced from 1988 to 1990; the OVA tones down the explicit sexual content and deviates entirely from the manga storyline and setting.

Set in the near future, a secret feudal monarchy led by an empress and named 'Hau Dragon' uses, as a front, a firm 'International Electronic Brains' and has built a set of eight giant robots, each possessing a power based upon the eight elements of earth, fire, water, air, thunder, mountains, the moon, and the heavens. However, one of them, Zeorymer of the Heavens, has been stolen and the main character, fifteen-year-old Masato Akitsu, is forced into piloting it with a mysterious girl named Miku Himuro.

Zeorymer possesses an energy based weapon called the "Dimensional Coupler Cannon" that appears almost telekinetic in nature; by holding its fist in the air, or aiming it at a target, energy strobes across the orb and causes a large explosion to engulf whatever enemy it is directed against. These orbs can also fire beams of golden-hued energy (labeled as the Energy Wave attack) which can cause massive damage, and project a forcefield which seems nearly impenetrable. The robot itself is also incredibly durable: in the third episode, it was struck with a weapon that left an effect similar to that of a nuclear warhead, yet suffered only minimal damage. Zeorymer of the Heavens is able to hover, fly, teleport unspecified distances, and possesses an incredibly potent weapon known as the Hades Attack: when it lifts its arms in the air then lowers them across its chest, slamming its fists together or against the large golden orb on its chest, the robot releases a huge blast of golden energy that, at full power, can cause an explosion visible from space (inferring the power of several gigatons at least, though even on lower settings this final weapon seems equal to most nuclear weapons in scale). When this attack is activated, a mysterious voice, possibly Zeorymer's itself, can be heard saying "Meiou," the attack's name.