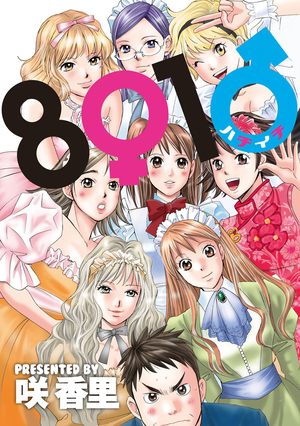 Kinoshita Shinichirou is a normal 17-year-old teenage boy; he likes video games, doesn't have much of an idea of his future and really wants a girlfriend. His grandfather, meanwhile, is head of a multinational corporation that Shinichirou is set to inherit upon turning 18. Not liking the supposed lack of direction his grandson has shown, he moves him into a mansion, where he is greeted by eight extremely pretty, very friendly girls in maid dresses.

His mind is promptly blown when they inform him that they are all his potential fiancées, there at his grandfather's bidding. And he must pick one within the year, but! No sex before the wedding, or the deal's off. If he fails to pick any girl, the deal is also off.

Hachi Ichi is an Ecchi Seinen harem comedy that adds a refreshing amount of reality and intelligence to the standard plot by writing each girl as their own characters, each with unique motivations, and having the male react appropriately to the standard tropes.