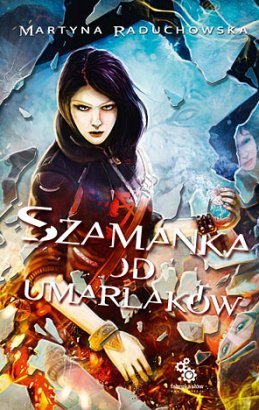 Ladies and gentlemen, our unwilling heroine.
A medium's life is screwed-up. A medium who doesn't want to be a medium is screwed-up doubly. Medium with no vocation, but with aversion to spirits, is screwed-up in every way possible.
Advertisement:

Szamanka od umarlaków, unofficially translated as "Shaman of the Undead" is a series of Urban Fantasy books by Polish author Martyna Raduchowska, so far untranslated to any other languages. Its protagonist is a young woman born in the modern-day southern Poland - specifically, the magical part.

Ida Brzezińska is the Black Sheep of her family - a powerful, influential family of wizards, whose only scion seems to possess no magical talent whatsoever. Tired with her parents' plots to send her to magical university and then marry her off to some Wizard-Council-influential magician to whom she can bear properly magical children, Ida runs away to Wrocław, to study psychology. Things get complicated when it turns out that she does, in fact, have a gift - as a "shaman of the undead", she's able to foresee people's deaths and obliged to lead their souls to the Land Of The Dead. Trained by her tongue-in-cheek old aunt Tekla, Ida foresees her first assignment and sets off to do the job... but the case turns more complicated than it initially seems.

Alternative Title(s): Shaman Of The Undead