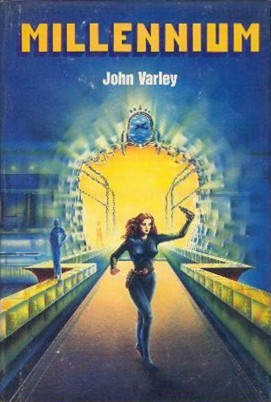 In 1989 Bill Smith, an agent of the National Transportation Safety Board, is sent to the scene of an airline accident in Minnesota where a Boeing 747 collided with a DC-10, shearing part of the wing off and causing both aircraft to crash. He and his colleagues find several oddities to the wreckage; all the watches found in the wreckage are forty-five minutes ahead — some were found running backwards — and the black box recorded the flight engineer running into the cockpit screaming that the passengers he had gone to check on were all burned and dead.

Meanwhile, about eighty thousand years in the future, Just Before the Endnote (Beat that Warhammer 40,000!). Pollution is so bad it is not only killing everyone but they can't exist without it, either. A plan is underway to use Time Travel to pluck humans from throughout history just before their deaths if it can be done in secrecy — historical lost colonies, shipwrecks, airplane cashes, any situation lacking survivors — the living are replaced with brain-dead duplicates and stored as Human Popsicles so they can eventually be sent somewhere far enough in the future (or elsewhere) that the pollution had broken down and the human race can start anew. This is tricky business, though; anything out of place can cause a time paradox which results in massive issues in the future they came from.

This book is not be confused with the various other works named Millennium.