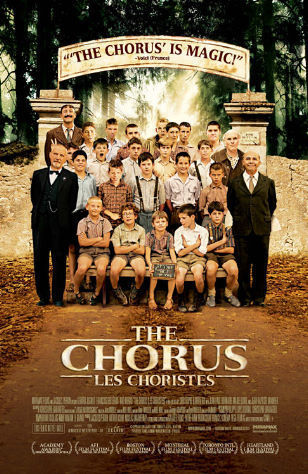 Les Choristes (literally "The Choristers", translated as The Chorus) is a 2004 French film directed and written by Christophe Barratier.

America, present day. Wildly successful orchestra conductor Pierre Morhange is called back to France for his mother's funeral, and is visited by Pépinot, his one-time classmate. He's brought a photograph of their school years, and the diary that their teacher kept.

Rewind back to 1949. Clément Mathieu, a failed musician, accepts a post at 'Fond de l'Etang' ('Rock Bottom'), a school for delinquent boys. Horrified both by their behaviour and the brutally repressive methods of headmaster Rachin, he begins to teach his class music as a way to get their attention. It... doesn't all go according to plan.