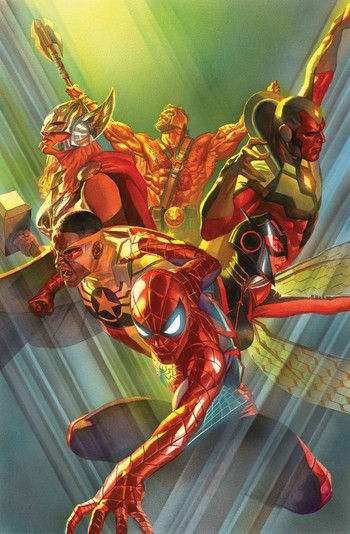 The Sequel Series to Mark Waid's All-New, All-Different Avengers, picking up right where the end of Civil War II and the first scene of Champions (2016) left off: Nova, Spider-Man (Miles Morales) and Ms. Marvel have all quit the Avengers and the team itself is strained folloing Civil War II. Joining the remaining members of the team (Captain America, Thor, The Vision) are The Wasp (Nadia Pym), Hercules and The Amazing Spider-Man. And just in time too, as the Avengers find themselves embroiled in "Kang War" due to The Vision stealing the infant Kang from his crib.

Concurrently with this series are a series of ".1" issues following Cap's Kooky Quartet and going more in depth into how three super criminals went from being hated by the public to being loved and trusted by it and is said to have some connection to the current run. Both series are part of Marvel NOW! (2016).

Following the Marvel Legacy relaunch the series was renumbered to #672 and crossed over with the concurrent run of Champions in an arc called "Worlds Collide" to stop the High Evolutionary from causing Earth's destruction.

This series, along with New Avengers (2015) and Uncanny Avengers, lead into the weekly Avengers: No Surrender event, which was co-written by Mark Waid, used the same numbering as this series, and featured members of this iteration of the team.