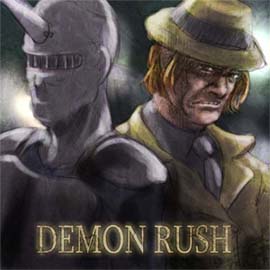 The Demon Rush is a PC RPG made in 2008 by Dragoon Entertainment, A.K.A The D. It is about a conflict between humans and demons called the Demon Rush, which has been going on for three years by the start of the game. However, a new breakthrough may put an end to the war. The city of Tiriad has built the S.S. Pursuit, the first spacecraft created in the Mittu System. This ship may be able to find the power needed to end the war. However, the mission goes awry, leaving two soldiers stranded on a distant planet.

The game gained some notoriety when the creator advertised it

on the Something Awful forums, selling it for $20. Most Goons who saw the thread felt this was too high, and the price was eventually lowered to $10, and then made free in December of 2010.

The game has a cult following thanks to its simplistic graphics and character art, catchy music, and the plot's mixture of familiar JRPG conventions with strange and unexpected twists. Mikwuyma did a live broadcast of the experience, recorded in these two

While the original game

is no longer available, an Updated Re-release called The Demon Rush: Legends Corrupt

was released to PlayStation 4 and Play Station Vita on June 2nd of 2020.

The Demon Rush provides examples of the following tropes: