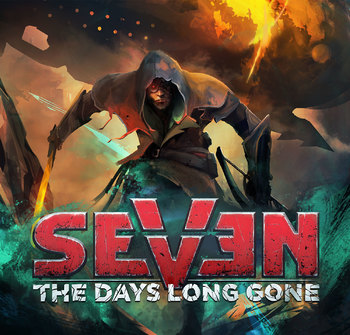 And we try, try, try, to keep a little beauty in the world
Seven: The Days Long Gone is an open world isometric stealth WRPG, released on Steam on December 1st, 2017. It was developed by IMGN.PRO and Fool’s Theory, with the team composed of many former members of CD Projekt RED. The game is a surreal blend of fantasy, post apocalyptic, science fiction, and cyberpunk that mixes extremely well.
Advertisement:

In a far future Earth, humanity can only dream of the so called Days Long Gone, a semi-mythical era before the great war, when man was master of nature, machine, and his own destiny. Even after the catastrophic war with the Daemons, trace elements of the ancient world remained; artifacts of magic and technology and their containing ruins were bitterly fought over by what passed for civilization. Until one day a God-Emporer, Drugun, rose and united most of mankind under his banner. Order came at the cost of personal freedom, and mankind is beginning to chafe under the iron fist of the man who once saved them from certain starvation.

The story puts you in the shoes of a master thief named Teriel. When he is caught in the vault of the previously impenetrable Grukbara manor, he is forcibly possessed by a demon and sent on a mission to the Penal Colony of Peh by Drugun himself. A civil war is brewing, and the artifacts found on Peh will be the decisive factor in whether Druguns empire survives, or something even worse comes along.