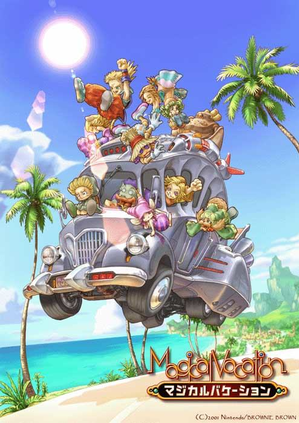 Magical Vacation (2001) for the Game Boy Advance was the first entry in a Nintendo role-playing game series that takes place on Kovomaka. The main characters are a group of trainee mages that attend the Will-O-Wisp magic school. They can interact with elemental spirits and cast elemental spells.
Advertisement:

In the first game, the students are on summer vacation (hence the name) when they are attacked by The Heartless which splits up the students. It's up to the main character to travel through different planes of existence to rescue their fellow students. While previewed in Nintendo Power, this game never met a Western release.

The Nintendo DS sequel, Magical Starsign (2006), takes place 800 years later, when one of the teachers disappears. The students find a six-pack of magical spaceships in a part of the school and get lost in space, having to reunite with each other and rescue their teacher. This game was released in the West.

Also, for some reason, a great deal of things in the games are made out of gummi. Including the power-ups and the Cosmic Keystones.

A fan English translation for Magical Vacation was released on June 7th, 2016, by the aptly named romhacking.net member Magicalpatcher.