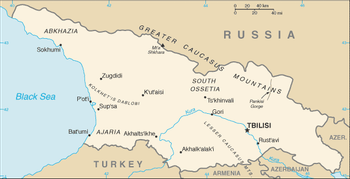 Georgia on My Mind...

Not that Georgia note although that line is referenced in "Back in the USSR", and it spawned a lot of jokes about Russians in Atlanta during the 2008 invasion—Georgia (Georgian: საქართველო Sakartvelo, Russian: Грузия Gruziya) is a former Soviet state located right smack in between Eastern Europe and Western Asia. It is situated in The Caucasus, and its national capital is Tbilisi. Formerly the Georgian SSR, it became independent with the collapse of the USSR. But the history of country goes much further back. It was mentioned in Greek myths as "Kolkhis" and since then it has always been a target of many empires due to its strategic location at the crossroads of Europe and Asia. It has been invaded by Romans, Persians, Arabs, Mongols, Seljuks, Ottomans, Russians and basically every major forces of nearby regions. Because many of these invaders happened to be Muslim, Christianity became tightly associated with nationality, and Georgia gained the nickname "Gatekeeper of Christianity".

Georgia produced a lot of aircraft for the Soviet Union, ending up with some left in the factory when it gained independence, but little else. It had an Su-25 fleet undergoing upgrades. What's left of it is unclear. It was also a major supplier of electric locomotives, and still exports them to Ukraine.

The country underwent a peaceful revolution in 2003, deposing Eduard Shevardnadze, former Soviet foreign minister. Russian forces have now been withdrawn. Georgia is a pro-American state, with plans to join NATO soon and has a street in Tbilisi named after George W. Bush. It was a member of the Multinational Coalition in Iraq, and sent 4,000 troops to aid in the Iraq War.

There are two breakaway regions of South Ossetia and Abkhazia, both backed by Moscow. During the Soviet period, both regions enjoyed autonomous status, which meant among other things, their own language media (such as an Abkhazian newspaper and language institute) and different representation in the Supreme Soviet. When Georgia departed from the Soviet Union, it became clear that both regions would lose their prior arrangement. A war in the early 1990s in the latter led to the mass expulsion of ethnic Georgians from that area and many deaths, with atrocities on both sides. This has led to tension between the two neighbours, culminating in Georgian troops invading South Ossetia to "restore peace and order" in August 2008. However, due to the indiscriminate shelling by Georgian forces, they ended up killing several Russian peacekeepers in the area, as well as dozens of South Ossetian civilians. This was considered an act of war by Moscow, and led to a massive and disproportionate Russian retaliation against Georgia, also claiming Georgian atrocities against ethnic Russians in South Ossetia. However, the Russian-backed separatists have also committed atrocities, which led to around 200K-250k Georgians to flee their homes in both Abkhazia and South Ossetia. Russia (and Nauru, Nicaragua, and Venezuela) have officially recognized South Ossetian and Abkhazian independence, with the West generally lining up in Georgia's corner. As a final poignant cap to this, in 2010, a major Georgian television news network broadcasted an Orson Wells-style hoax stating Russia had invaded Georgia, and that the political opposition had killed the President. In October 2012, the newly elected Prime minister Bidzina Ivanishvili pledged to try to mend Georgia's severely damaged relations with Russia.

A third region just north of Armenia known as Samtskhe-Javakheti, populated largely by ethnic Armenians, has also been pushing for autonomy (since the region has been subject to severe neglect, forced ethnic integration, and kept in poverty by an apathetic Georgian government), leading to some instability, ethnic clashes and shaky relations with Armenia as a result. Though Armenia has shown concern for the plight of the people of Javakh, a repeat of the war those two countries had over the region back in 1918 isn't too likely as landlocked Armenia needs Georgia for importing and exporting, and it already has its hands full with Turkey and an increasingly threatening Azerbaijan. Georgia also has a small border dispute with Azerbaijan over the David-Gareja monastery complex, but this has never evolved into a serious issue. Otherwise, Georgia has fairly stable relations with all three countries, aside from Armenia and Azerbaijan often trying to convince it to take sides in their conflicts.

Georgian uses a different alphabet from Russian and a VERY different language. It is (as far as we know) completely unrelated to any of the major language families, instead being part of a "Kartvelian" family more or less consisting of itself and a couple of close relatives.note Even "Kartvelian" itself is just derived from kartveli, which is Georgian for, well, Georgian.

Georgia is known as the homeland of wine. The first traces of winemaking were found there. Today, there are over 500 sorts of winegrapes known in Georgia. Another cultural characteristic is that Georgia is (one of the) earliest countries to develop polyphonic music, with three vocal parts. Yet another important characteristic is the importance of guests. An old saying is that a guest comes from God and was considered sacred. Even today, foreign guests are amazed by the love and respect the strange people show them. Due to the importance of Christianity, its elements are everywhere, most notably almost all of the old architecture consists of churches, and the flag too contains five crosses; that said, Georgia has long had a large minority of Muslims who remain to this day, although many of their number have spread across the Muslim world and assimilated there (a good number in the 19th century joined the armies of the neighboring Circassians and ended up in high places across the Arab world). All in all, the Georgian culture was always Western-oriented, but with big Eastern influences, creating a unique culture.

Georgia (West Georgia, to be precise) is also the place Jason and the Argonauts went to get the Golden Fleece, although it was named Colchis at that time and later for quite a while.

The Patron Saint of the country is St. George, as for Serbia, Russia, England, Greece, Montenegro and Canada, among other territories. However it is not named after St. George, at least not directly; the name comes from the Ancient Greek word "geōrgos", which means "land-worker". The Greeks named the country "geōrgos", because they were the only people working on land in the region as they first met them. However, the name George has the same origin; it was a personal name meaning "land-worker", i.e. farmer. (The Georgians reciprocated by calling Greece "Saberdzneti", based on the root word "berdz", which means "wisdom". Georgian is one of two languages that doesn't refer to Greece using derivatives of "Greece", "Ionia", or "Hellas", the other being Chechen, and likely the only one that refers to Greece as "land of wisdom".)

One interesting thing about Georgia is that it's not clear on which continent it is. According to some sources, it's Europe, according to others - Asia (German Post, for example, considers it to be in Asia, as it costs more to send things to Asia than to Europe, but Organizations for European cooperation etc. considers it to be in Europe). Actually, the problem plagues the entire Caucasus; ordinary folks would have problems dictating which continent that neighbors Azerbaijan and Armenia (the latter of which, geographically-speaking, is located wholly in Asia, but is sometimes classified as a part of Europe due to its Christian heritage) belong to. The three countries, after all, are the crossroad of the two continents and are the definitive examples of "East meets West", sharing this distinction with Turkey, Cyprus, Kazakhstan and Russia.note The most commonly used of the several competing Europe-Asia geographical boundary lines passes along the spine of the Caucasus range, putting most of Georgia in Asia but slivers of the north in Europe; note, however, that "most commonly used" does not mean "used by the majority" - not even close.

The flag is based on the Saint George's Cross

(the same as England), in honor of its patron saint. Its main differentiation from other flags of its type are four Bolnisi Crosses

Our icon is the homeland
Trust in God is our creed,
Enlightened land of plains and mounts,
Blessed by God and holy heaven.
The freedom we have learnt to follow
Makes our future spirits stronger,
Morning star will rise above us
And lightens up the land between the two seas.
Glory to long-cherished freedom,
Glory to liberty!
Government Miscellaneous