Film / Do Not Grieve 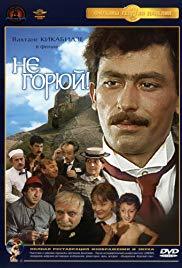 Do not grieve! (Georgian: არ იდარდო!) (Russian: Не горюй!) is a 1969 comedy film by Soviet Georgian director Georgi Danelia, produced by Mosfilm and Gruziya-film, starring Vakhtang Kikabidze and a lot of the best Georgian actors at that time.

The film takes place in a small town in Georgia and shows a typical life in XIX-XX century Georgia, the people and the situation there. This is quite paradoxical, as the "most Georgian" film of Danelia is based on a French novel, Claude Tillie's My Uncle Benjamen, although the setting was completely changed into XIX century Georgia.

Dr. Benjamen Glonti returns to his hometown after finishing St. Petersburg University with great plans and hopes. The life in town goes on as before, but, unlike his sister Sofiko, with whose growing family Benjamen lives, his life doesn't seem to be going anywhere. That's when Sofiko decides to marry him to the daughter of the old pharmacist. And that's when all hell breaks loose.