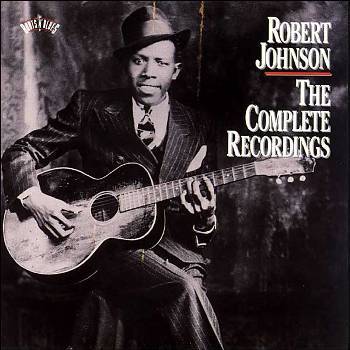 "Now run here, baby, set down on my knee. I wanna tell you all about the way they treated me."
Advertisement:

The Complete Recordings is a compilation album by Robert Johnson, released in 1990. Recorded in the mid-1930's, it collects all his work, except for one alternate take of "Travelling Riverside Blues". In that regard it replaces and surpasses the first two compilation albums released under his name: King Of The Delta Blues Singers, Volume I from 1961 and Volume II from 1970.

Apart from the musical qualities the historical importance of this excellent compilation can't be overstated enough. It is per definition the most essential Blues record ever made and the tracks presented here inspired countless blues, Folk Music and Blues Rock singers who followed in Johnson's footsteps. Several of the songs are also Covered Up to this day. "The Complete Recordings" won the 1991 Grammy Award for "Best Historical Album", was inducted in the Blues Hall of Fame a year later and in 2003 the National Recording Registry included it in their collection for its "cultural, historical and aesthetical significance".

In 2011 the album was remastered as The Centennial Collection, with a changed track order and with the missing alternate take of "Traveling Riverside Blues" added. The original 1990 album placed the alternate takes side-by-side with the master tracks, instead of at the end of the discs. In all incarnations this album is one of the most essential and timeless musical works in existence.

You've got keep readin, tropes fallin' down like hail...