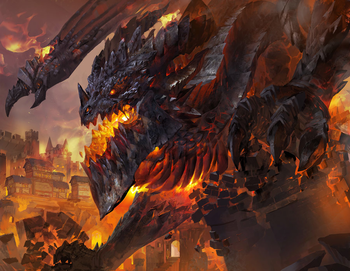 "The sun has set on this mortal world, fools. Make peace with your end, for the Hour of Twilight falls!"
"I have no desire to march through the streets with an axe or a hammer, meeting my foes in the flesh...I shall meet them in spirit and crush them from afar, devouring them by the hundreds and the thousands...and I shall...wipe this world clean, to remake it in my own image!"
—Gul'Dan to Cho'Gall, Tides of Darkness
Advertisement:

Whether in the original games, World of Warcraft (WoW), or the Warcraft Expanded Universe, Azeroth has played host to many characters. Here are the most vile.