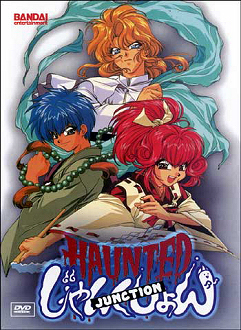 Haunted Junction is a shonen manga by Nemu Mukudori, which was published in Dengeki Comic Gao! by MediaWorks from 1996 to 2001. The anime, produced by Bandai Visual and Studio DEEN, aired between 2 April 1997 and 25 June 1997.

There's a school built on a Hellmouth... well, at least something like it, a conflux of mystical energies that makes all sorts of screwball things happen. Like how anyone who jumps in the fourth lane of the swimming pool instantly drowns. How there are horrible monsters here and there in the school. And ghosts. And magic mirrors. And stuff. To keep this all under some semblance of control, Chairman and owner of the school Tatsuyuki Saitou has organized the children of the local clergy into the Holy Student Council.

The main character, Haruto Houjou, is the son of a minister and president of the student council, a position he desperately wants out of. His first appearance onscreen is his first attempt to bow out of the presidency. He's fed up with the insanity. He'd like to transfer to a different school. The principal won't let him.

Also on the Holy Student Council is the son (or grandson, if you follow the manga) of a local Buddhist monk, Kazumi Ryudo, who specializes in getting possessed by various spirits, especially animals, and is constantly lusting after the bathroom spirit Toilet Hanako. There is also Mutsuki Asahina, a strongwilled and redhaired miko (daughter of a local Shinto priestess) with an extreme case of paedophilia. Neither of them are particularly sympathetic to their president's desire to leave; they think it's cool to have all this weird stuff going on, mainly because they get to cut class and slack off during school hours.

The story quickly heads to a Gotta Catch 'Em All wherein the trio hunt down... badges? Little round badges that can be used to summon seven spirits (well, one of the spirits is two distinct spirits that work together). These spirits include:

After they've all been caught, the main character ends up using the spirits to try to drive out various supernatural forces that enter the school, from the ghost of a dead cartoonist to some far scarier stuff...