Trope Co. Trope of the Week 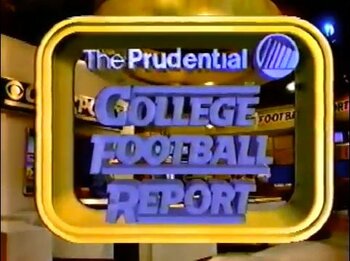 The CBS Sports College Football halftime show starting in 1985 with Jim Nantz and Pat Haden.
"They'll be dancing in the streets of Total Network Solutions

A form of Product Placement (and a specific type of Enforced Plug) seen mainly in sports shows and other competitions, but not exclusive to them, where something of importance will be named after a sponsor. Often, this practice results in some pretty awkward names for things and making the announcers sound like characters in a commercial.

The most common thing to get this treatment is highlight footage, where sponsors will sometimes try to work their slogan or a pun into the name, making the name even more awkward. But it's not the only thing. You can see unusual executive-induced naming patterns in anything from trophies to arenas. Sometimes, the event itself will be sporting the name of a corporation, but in those cases, people usually drop the sponsor's name in casual conversation.

Not to be confused with the Trope Of The Week series of videos.