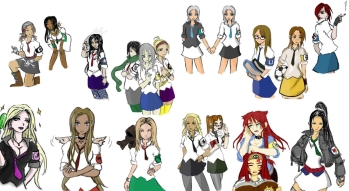 After about a year and a half, post-creation, interest tapered off in the series, as happens on the internet. However, a 4chan user by the name of Someone else., otherwise known as the Tales of the Emperasque guy, decided that the project needed revival. In conjunction with two other users named Ahriman's Aide and Darkmage, Someone else. wrote a short story in the setting, named Just Another Day on Void Platform 13. Shortly thereafter, the three off them took off running, and have added nearly ten more stories to the setting.

A full list of the stories can be found here: http://1d4chan.org/wiki/Warhammer_High

Stories in this series provide examples of: