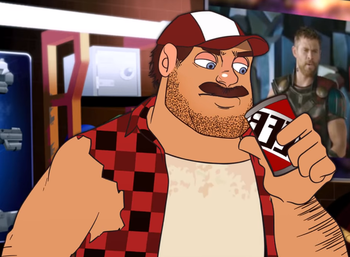 Just make sure you don't drink so much you're chemically dependent like he is
I would say take a shot every time we say "Life Fiber", but you'd definitely die, Wiz. And DON'T try that at home!
—Boomstick, Shadow vs. Ryuko
Advertisement:

...So we'll provide alternative rules for you to pick and choose from. It's time for a DRINKING GAAAAAAAAAAAAAME!

In the comments section:

Remember, take breaks between matches, or sit out on drinking for a match or two if need be. Keep water on hand. If you plan on doing a Death Battle drinking game marathon, don't go all out with the booze; keep it low so you can keep playing.