Comic Book / The Stuff of Legend 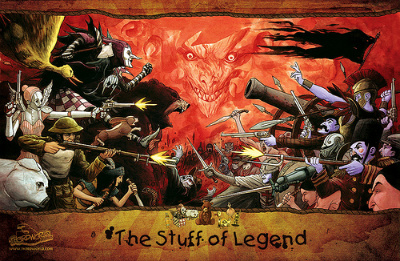 Playing with your toys has never been this epic.

During World War II, a young boy is kidnapped by the Boogeyman and held hostage in the Dark, the Boogeyman's domain. A handful of brave toys venture into the Dark in order to save him. However, they need to fight hordes of bitter, vengeful, discarded toys who have every intention of serving the Boogeyman and no intention on letting the boy go. And apparently, the Dark turns everything into the Darker and Edgier version of itself, including our heroes.

It's pretty much The Book of Lost Things meets Toy Story.

The Stuff of Legend is an independent comic book series that was published in 2009. The next volume of the series is expected to hit shelves in spring 2010.

Disney is planning a film adaptation, of which will mix CGI and live-action.