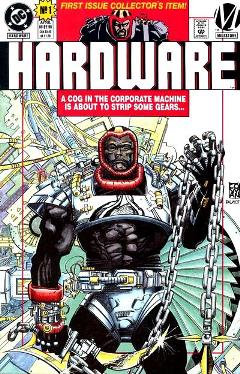 All that hardware and it still can't play Crysis.
When I was a kid, I used to have this parakeet. And sometimes, when I'd open up his cage to clean it... he'd escape. The little bird would see the backyard and make his move. Invariably, he'd head straight for the window, fast as he could. And inevitably, crack his head on the windowpane... a barrier of glass, unseen and incomprehensible to him. So he'd try again, over and over... until, spent and defeated, he couldn't try any longer. My bird made a common error. He mistook being out of his cage... for being free. The parakeet died a long time ago, without ever enjoying the freedom of the yard. The boy grew into a man, who spent many years bumping his head against a similar barrier: a ceiling of glass, unseen and incomprehensible to him. The lesson is clear: escape is impossible until one perceives all of the barriers. My name is Curtis Metcalf. But you can call me Hardware.
— Curtis Metcalf
Advertisement:

Hardware is a Milestone Comics character who debuted in 1993 as one of their flagship heroes, and the first comic ever released by the company. He first appeared in "Hardware" #1 (April, 1993), created by Dwayne McDuffie and Denys Cowan. The character is an Angry Black Man in Powered Armor, also a Gadgeteer Genius. Curtis Metcalf, an inner-city Child Prodigy, is discovered by famous inventor Edwin Alva who sees potential in him and pays his way through the top schools in the country, on condition that he works for him when his education is completed. His creations make millions of dollars for the company, leading him to ask his boss for a simple raise. After many years of viewing his mentor as a surrogate father, he is shocked to find that Alva has absolutely no respect for him, and views their relationship as little more than master and dog.

In an attempt to blackmail his boss to get out of the lifetime contract, Curtis digs up some dirt on Alva and discovers he is actually a criminal mastermind at the center of a vast evil organization, with illegal operations spanning across the country. Realizing the man he's been working for is evil and that he must be stopped, Curtis gathers enough evidence to put him away for multiple lifetimes and sends them to every possible authority. To no avail. Edwin Alva is too big, his levels of corruption and influence make him completely above the law. But not necessarily out of reach. Taking advantage of the vast resources completely at his disposal, Curtis designs an advanced powered suit and develops the identity of Hardware, launching a one-man vendetta against his former mentor.

His original series lasted for 50 issues, from April, 1993 to April, 1997. The series was cancelled when Milestone shut down its comic book division. In 2008, the character was brought into the DC Universe after the events of Final Crisis. After guest-starring in a storyline in Justice League and an issue of The Brave and the Bold (where he teamed up with Blue Beetle), Hardware was made into a supporting character in the 2011 Static Shock comic book series, where he acted as a mentor to the title character.